Brunch in Brooklyn, walking and shopping in Soho, drinks and a late lunch in the West Village, followed by bourbon and bocce in Brooklyn until the wee hours… 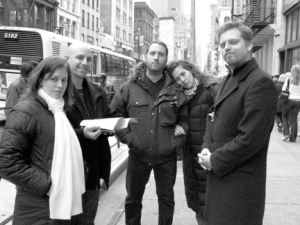 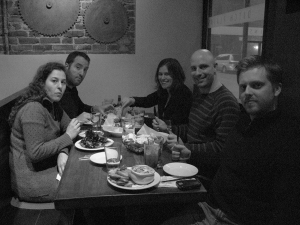 Karen and Andrew contemplating an orange at Ditch Plains.

Ditchdogs! – the best hot dogs in NYC at Ditch Plains where they take all beef dogs and smother them in homemade macaroni and cheese. Tastes like a little piece of heaven. 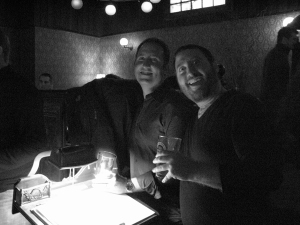 Ian and Alan at Union Hall in Brooklyn, surveying the scene on the bocce court.

The cheerleaders – Kaitlyn and Andrew.

Doing it for the fans – Karen checks her phone for bocce stats to see if Alan and Jon have reached the undefeated record.

The bocce kings – Jon and Alan

Jon surveys the damage, but the pirate girls finally beat the dynamic duo in a match to the death.

A look back at the long list of casualties.