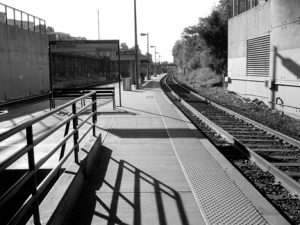 Something struck me last week as I was riding the bus to work and reading Colson Whitehead’s “The Colossus of New York”. In his collection of vignettes about New York City he writes, “everybody remembers the city. Some people the city remembers.” For some reason his words struck me and got me thinking – Which cities remember me? I remember all the cities I’ve lived in, but I’m guessing that only a choice few remember me.

Obviously Portland remembers me and is now getting to know me again. I mean how could it forget the girl who danced (sans a respectable amount of clothing) in its Salmon Street Fountain on her 21st birthday after consuming one too many jello shots at the Lotus.

But I know I haven’t left an impression like that everywhere I’ve lived. I know Pebble Beach doesn’t remember me. That’s where I learned the art of being present, but not seen. And I’d be surprised if Bridgeport even recognized my face. I slipped in and out of that town like I was Keyser Soze.

Boston will never forget me. I may not have had a fountainesque moment on its streets, but let’s just say I got around. No not in that way, but living without a car really forces you to get to know a city and for the city to get to know you. But if I had to choose one moment when I knew for sure that the city, in this story represented by the T conductor, took notice it would have to be one warm morning last summer. I knew I was running late, but when I heard the train rumble into the station as I was standing on the other side of a four-lane street and at the top of dozens of stairs I knew I was pushing it. After a split-second thought-process I went for it. As I rounded the bottom of the stairs (the first chance I would get to see if the train was still there) I was excited to see it was, but that it was already lurching forward. Ah, but the door was still open so I just kept on running.

Now these doors are kind of tricky. There’s a gap between the platform and the stairs that lead up to the ground floor of the train, which has this trap door kind of thing that the conductor closes when the train starts moving. So as I leapt on to the moving train (in heels no less), hoping I wouldn’t miss and fall under the train and onto the tracks, I looked up to see the conductor closing the trap door. Fortunately I startled him enough that he froze and didn’t drop the steel plate on my head. Instead he grabbed my arm and pulled me up. At that moment the city’s rhythm merged with mine and though we’d been dancing around each other for years, we truly took notice of each other.