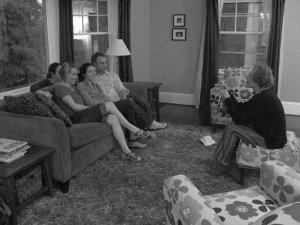 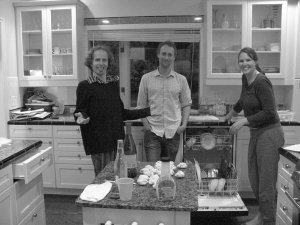 When I think of the four of us being together I can’t forget the image of us saying goodbye to each other in August 1999 on a blistering hot day on the streets of Rome after spending an idyllic month in the Tuscan town of Siena and its surrounding hills painting watercolors. We had capped our month in Siena off with a weeklong trip to the coastal town of Monterosso in Cinque Terre and then to Rome to see the Villa Lante. In Rome we were parting ways, Ivy was heading to Boston, Catriona was meeting up with Sam on Sardinia, Tara was heading south to Naples, and I was heading north to France.

The scene of our most recent reunion was a typical spring-like sunny and misty weekend in Portland where we ate dinner overlooking the city with a view of Mt. Hood and and watched an unusually tempestuous storm roll in. Ivy thought for sure it would just sprinkle a bit and pass by in time for a little jaunt to the nearby rose gardens, but the storm had a slightly different idea and unleashed more rain, thunder and lightning than I ever remember seeing in Portland.

At the end our weekend – after we had prowled around Portland’s east side – we realized we had the most fun when we were just hanging out and catching up. That was what it was all about.