I don’t recall how we got on this topic, but I do remember saying I don’t kiss and tell. That’s not really where the story starts, but I honestly don’t know where it starts. Does it start when we met back in Boston? Does it start when my plane touched down in L.A. last Friday? Did it start on some late night around our kitchen table in Brookline after one too many shots of bourbon? Ever since we all started hanging out it felt like we just landed in the middle of friendships that had no beginning or end. Peter describes us as the family we chose. So when I got the message that we were getting together in L.A. for Dave’s birthday I knew I had to go.

We’re all scattered around the world now. I’m in Portland, Garrett is in L.A., Peter never stays in any one place for too long, Dave has just returned from Spain, and Margaret is still in Chile. It’s just over a year since we were last together, all of us, on the Vineyard for our annual Memorial Day weekend. We kind of knew then that it would be our last Memorial Day for at least a year… since Margaret would be in Chile and Dave in Spain. I didn’t know then that I’d be in Portland, but it was looking more and more likely.

So it was a gift to be together again, not on the Eastern seaboard of course, and not everyone since Margaret is still in Chile. But along the Pacific on the left coast in LA LA Land. A sublimely surreal place on Earth, but what did we care. We were having the time of our lives, just being together and picking up right where we left off. And of course I could give you the play-by-play, but I don’t “kiss and tell”. 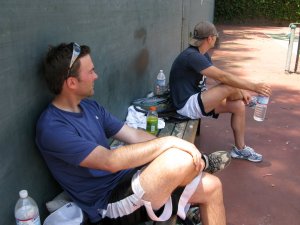