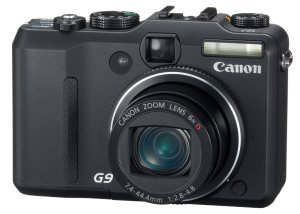 Canon G9, a beloved point and shoot digital camera who captured many memories during her short life, was swept away in Columbia Creek during a raging rain storm today. She was two years old.

After being coated with rain during a mid-afternoon storm, the Canon G9’s slick exterior prevented a good grip. She quickly fell out of the hands holding her, bouncing down a steep muddy bank and into a swift flowing creek right above a waterfall. In a futile attempt to save the 12.1 megapixel workhorse, photographer Laurie Matthews slid down the slick bank and into the creek, but the camera was long gone.

Canon G9 was met with illustrious reviews when she was launched in October 2007. As one reviewer stated, “The new Canon Powershot G9 is the sort of elegant, very capable, and completely self-contained imaging tool that Henri Cartier-Bresson (if he were still with us) might have used to capture the “decisive moments” of the 21st century.”

During her two year life she traveled extensively within the United States and abroad including New York, Massachusetts, California, Missouri, Montana, Minnesota, and Mexico. She captured the weddings of dear friends, holiday trips, and architectural details of many noted buildings and landscapes. Highlights of her work are captured on this blog, facebook, and flickr.

Canon G9 is survived by her owner, Laurie Matthews and all of the photos she’s taken over the past two years.

3 thoughts on “in memory”