Not only did the Clash of Champions highlight tennis, but it served as a complete love fest for the University of Oregon. Obviously none of this would be possible without the University’s close ties to Nike and everyone at Matt Court knew it. One spectator, who perfectly captured the crowd’s sentiments about halfway through the evening yelled, “thank you Uncle Phil”! I couldn’t have said it better myself!

The love fest was present in every detail – from Nadal, Federer, Sharapova and Azarenka dressed in UO colors to the little Oregon Os on each of their custom made shoes. There were videos that played throughout the evening highlighting Oregon and Nike’s ties to great sports moments, and UO football stars Joey Harrington and Dennis Dixon served as linesmen. After the matches the tennis stars donned custom made Oregon football jerseys while joining the crowd in our common refrains – “OOOOOOOOO” and “Go Ducks”! Complete and utter love fest… you know like two teenagers who’ve just started dating. Kind of amazing after all these years.

I never thought I’d see the day when my two sports loves would be together in one place! Add in the Red Sox and you would have had to take me away in an ambulance. Good thing that didn’t happen. I wouldn’t have wanted to miss a minute. 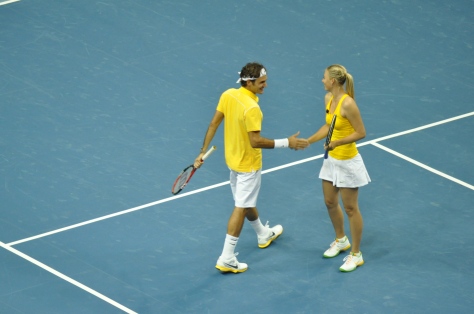 I especially loved the details on the shoes from the little O’s on the tongues to the green and yellow tread patterns. 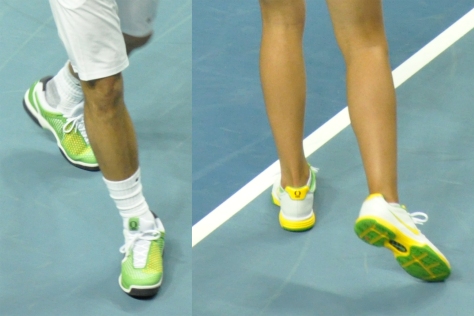 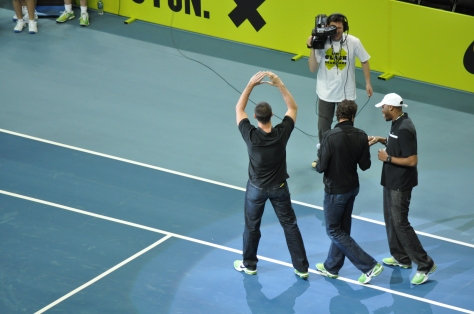 Even the Duck can’t believe he’s standing next to Nadal… and Federer, Sharapova and Azarenka!