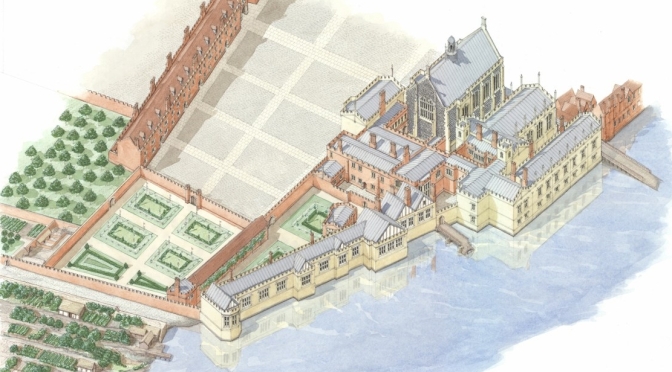 It is generally believed that Henry VIII’s affair with Mary Boleyn Carey began on this day in 1522 following their performances in a play held at York Place, Cardinal Wolsey’s home in London, which later became the royal Whitehall Palace. The ‘Chateau Vert’ was staged on Shrove Tuesday during a diplomatic visit with representatives of Charles V, King of Spain and the Holy Roman Emperor, who was interested in marrying Henry’s daughter, Princess Mary. The play’s theme was unrequited love and followed a jousting tournament where Henry had embroidered on his caparison the words “elle mon coeur a navera,” aka “she has wounded my heart.” The theories go that up until this point Mary had thwarted Henry’s advances.

At the time, Mary Boleyn Carey was married to William Carey, one of the King’s Gentlemen of the Privy Chamber. In fact, the King had attended their wedding two years earlier. However, many feel the King learned from his affair with the unmarried Elizabeth Blount who bore him an illegitimate son, that having affairs with married women would be easier to hide.

While the exact timing and length of their affair may never be known, Henry VIII confirmed the liaison himself when he was in the process of breaking from the Roman Catholic church in 1533 so he could marry Mary’s sister, Anne Boleyn. During the course of that process, George Throckmorton accused the king of having sexual relations with Anne’s mother and sister and Henry replied, “never with the mother.”

York Place, now gone, was located across the Thames River from the London Eye where the Banqueting House, Ministry of Defense and Victoria Embankment Gardens now exist. Based on an illustration of York Place’s buildings and gardens by the Historic Royal Palaces, and a comparison of that illustration with a 1680 plan of Whitehall Palace (what York Place later became) and contemporary aerial photo, a small part of the private gardens associated with York Place are contained within the larger expanse of the Victoria Embankment Gardens. I haven’t yet visited this part of Tudor London but look forward to visiting when I’m there next.