…the most exciting place to be… 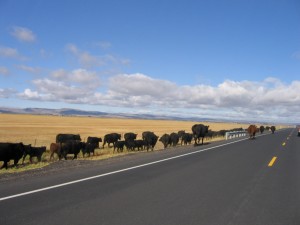 I’ve never been a cowgirl… yes, I went to horse camp and I rode horses growing up. I have cowboy boots and a cowboy hat, but I’ve never been a cowgirl. But for twenty minutes one Monday afternoon as I was driving down a two-lane road in Eastern Oregon I got to feel like I was herding a drove of cattle to their winter pasture. I got to feel like a cowgirl. Giddyup and get along little doggies!

Earlier this week my mind wandered in two directions. After working for twelve days straight and hitting sixteen hours of work in one day I was starting to think about time away… can you blame me?

So my mind wandered to discussions I had back in July with Lee, Tricia and Cyd as were leaving the Rahr Ranch in Montana that we should organize a girls weekend in the fall, maybe the pine-scented air of central Oregon or maybe the ocean-misted air of the Oregon coast. The best laid plans just got swept up in all of our busy schedules and so nothing had been set. I was wishing it had.

Soon after I had this strange, but vivid image of me in a cozy cabin on a mountain surrounded by snow. I’m not even a winter girl, but the image seemed so real and so rejuvenating. I didn’t think about it again until yesterday morning when I found out I had won a weekend trip for four to Jackson Hole, Wyoming. Airfare – paid, Rental car – provided, Beautiful eco-hotel – included, spa appointments – covered, lift tickets – check!

Now the dream is a reality, three of my girlfriends and I are going to Jackson Hole to get pampered on a winter weekend getaway. If you dream it… it will come. 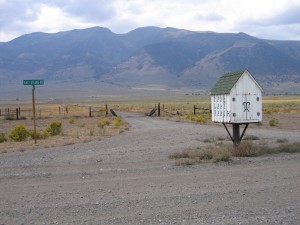 big mountains, big spaces and great big mailboxes. everything is bigger out here. Hell, the mailbox is bigger than the road sign.
– musings from my road trip through eastern oregon –