Do you remember the first time you watched the Wizard of Oz? I do. I took off in the tornado, I followed the yellow brick road, I put my feet into those bright ruby red slippers. I was also scared shitless of the wicked witch and those creepy flying monkeys, and yes I was crushed when the all the magic turned out to be a mirage hiding behind the curtain.

I never thought I’d actually live the Wizard of Oz, but the Microsoft Office Winter Olympics Blogging Contest was just that. I took off in a tornado the day I found out I was a semi-finalist, I followed a magical yellow brick road during the voting, and slipped my feet into a pair of ruby red slippers the day Margie Boule wrote a column about me in The Oregonian. I felt like you were right there with me – my own lion, tin man and scarecrow sharing the journey. Unfortunately once the voting ended things changed, so let me part the curtains and share this story’s ending.

First, let me just say that I would do it all over again. I would walk through the forest and the poppy fields again and again especially if I had the lion, tin man and scarecrow by my side.

Come opening ceremonies I’ll be watching the Olympics from the cozy comfort of my living room, which to be honest was a heartbreaking realization at first. Not because the other contestants didn’t deserve to win – they are part of a creative community that continues to inspire me. But because we were all jerked around for weeks while the contest organizers, public relations folks mind you, forgot how to communicate.

During the vote, we were encouraged to use every available means of communication from the phone to email to twitter to facebook to the media and good old fashioned snail mail – anything to get the word out! We were marketing our blogs yes, but also their products. I took a crash course in social media marketing – I think we all did and (pat on the back) we kicked ass. At times I felt like a reporter in a war zone – things were coming at me that fast. So it’s sadly ironic that the communication turned out to be so one-sided.

Though the votes were likely tallied within 24 hours we were told we would need to wait until the end of the week for the judges to make their decision. Totally logical. However, the end of that week came and went with no word. When word did come, it was sparse and not widely distributed. One person was told one thing, while others were told something else or completely left in the dark. This continued for weeks – you’ll know by Thursday… sorry there’s a delay you’ll know next week… never mind, just a few more days. In the end I found out the results indirectly through a Facebook posting on Christmas Eve. I figured that would be followed up with a phone call or an email message, but it never was.

In addition to letting us know who would be going to the Olympics, we were asked to keep quiet for a few more weeks. So even though I knew the results I had to lie to all the people who supported me and who were nearly as invested in the adventure as I was. But even that deadline came and went with no word. The man behind the curtain had disappeared yet again. The whole thing was frustrating for sure, but also getting more and more ridiculous as time passed.

In the end I hoped all the delays would be worth it, that they would lead to some colossal exciting announcement! I mean I wasn’t expecting a bunch of munchkins gathering for a hot air balloon send-off or a good witch floating down from the sky, but I was expecting something. But as far as I can tell, all they did was change the website. Such a let down for all that lead up.

As heartbreaking, frustrating, and absolutely maddening as the end was… the beginning was even more heartwarming, inspiring and exhilarating. Through this I tapped into an online community full of creativity and possibility, I shared my self and my work more than ever before, and by doing so I connected with friends and family on a whole new level. I may have had to peer behind the curtain, but I also got to follow the yellow brick road. 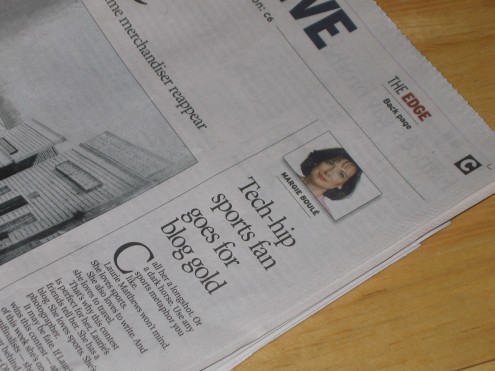 I’m pinching myself. I’m over the moon. I can’t believe this is really happening to me.

I’ve been interviewed before (about Rafael Nadal when I was attending the U.S. Open, when the U.S. Supreme Court handed down a decision about high school newspaper censorship, when my middle school opened for the very first day, and a few months after I returned home from New York City following an internship at Lear’s magazine), but this is different.

This is not just by chance or being at the right place at the right time. This is part of a life-long dream, and this is due in every possible way to my mom’s friend Carol, who’s been one of the biggest supporters and fans of this blog. So thank you Carol!! This wouldn’t be happening without you.
Here’s Margie Boule’s column in today’s Oregonian…
http://www.oregonlive.com/news/oregonian/margie_boule/index.ssf/2009/11/a_tech-hip_sports_fan_from_por.html
And just for kicks and giggles here’s the New York Times article where I was quoted about Rafael Nadal. It ran in the Style section a few years back. How perfect is that?!
http://www.nytimes.com/2006/09/07/fashion/07tennis.html