in the summer of 1975 when i was five years old my dad was in a plane crash in denver, colorado. i only remember pieces of the story – something about wind shears and crashing soon after take-off and that my dad survived. i didn’t remember anything else. the most lasting impression is an image in my mind’s eye of a newspaper article with a photograph of my dad next to it. he’s wearing a white dress shirt, 70s era wide tie and suit jacket with a full head of lustrous blond hair.

with the amazing powers of the internet i found excerpts from the NTSB crash report that allowed me to fill in the details. it was august 7th, a hot humid day on the tarmac, when the plane took off at 4:10 in the afternoon. thunderstorms were passing over the northern section of the airport. the plane rose before encountering an unforgiving wind shear which caused the plane to descend at an unrecoverable rate.

according to the flightcrew, the aircraft climbed normally to 150 to 200 feet above the runway. the captain felt the aircraft sink before re-taking control and advancing the power to maximum levels. however, the aircraft continued to descend. at 4:11 the plane struck the ground on the right shoulder of runway 35L before sliding 2000 feet and resting on an airport road. 134 passengers were aboard the flight. fortunately only 15 were injured and no one was killed. my dad was one of the lucky few who had a few scrapes and bruises, but was generally unharmed.

though something like this could make me fearful of flying, i actually view it as a good omen. my dad was fortunate! blessings!

i decanted my first batch of kombucha that had been brewing in my kitchen over the past two weeks. it had just the right amount of zing. all of that lovely liquid fit snugly into six glass bottles. they are now hanging out in my pantry while they develop a little fizz. once that’s done i’ll move them to my fridge where they wait until drinking commences. at that point i’ll add a little sweet juice to balance out the tart kombucha. i can hardly wait! 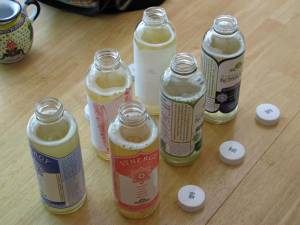 Written on the side of a VW bus in downtown Portland – “I wish my girlfriend was this dirty.” Honestly she (the car, not the girl) could have been a little dirtier.

this beautiful form took me from a mountain top in oregon to a cliffside in italy – such strength, such simplicity, such contrast between light and dark. i love the way it frames views and forms the foundation for beautiful spaces.

on my way back to portland from silver falls state park i made a few quick stops – to enjoy the architecture and peace at mt. angel abbey, to savor what’s fresh from the fields at a produce stand, and to soak in the colors of saturated pink poppy fields.

a pink sliver hovering above the wheat fields becomes

a sea of brightly hued poppies