I’m still in shock to be sure, but there’s no denying that the Red Sox were just crowned World Series Champions!

This was an amazing season. I attended my last home game in August with Andrew, Kaitlyn and Amy just before moving back to Portland. It was a magical night with the first pitch being tossed by new Celtic Kevin Garnett. Little did we know that it was just the beginning of an amazing three month stretch of highs and lows.

It wouldn’t have been the Red Sox without a couple scares – first from the Yankees as they nearly caught up with our regular season record and then from the Indians when we were down 3-1 in the ALCS and had to win three games in a row to make it to the World Series. But with players like personal favorites Jacoby Ellsbury, Dustin Pedroia, Josh Beckett and Mike Lowell it now seems destined that we would win baseball’s biggest prize just three years after the groundbreaking 2004 season.

It was hard being thousands of miles away from the heart of Red Sox Nation, but I found my own little outpost here in Portland. A few die hard Sox fans even renamed Portland to “Boston, Oregon” for the Series in honor of current Red Sox player Jacoby Ellsbury and former Red Sox legend Johnny Pesky who are both from Oregon, of legend Bobby Doerr who lives here now so he can flyfish along the Rogue River, and the fact that Portland was almost named Boston (in 1845 the town was named Portland after Maine native Francis Pettygrove won a coin toss against Boston native Asa Lovejoy).

I have to agree with Jonathan Papelbon who referred to this year’s team as the bedazzlers – it was a bedazzling season for sure! Go Sox! (photo – Boston Globe)

During the last twenty-four hours I’ve been dually reminded of Mahatma Gandhi’s inspiring quote, “Be the change that you want to see in the world.”

On some days it seems a bit too theoretical, but last night when I ran into an old friend it was refreshingly real. Truth be told I only went to school with Gunnar for one year, but we ran into each other amidst a flurry of excitement at a restaurant in Portland and he recognized me after all these years (23 to be exact).

It would have been so easy for him to ignore me, but he stepped out of his way to say hello. He was so warm and charming and genuine. I wish everyone would follow his lead and be that open with the people around them, friends or enemies, in a truly genuine way. He probably doesn’t even know it, but he’s the change I want to see in the world.

Gunnar is in the middle in the blue shirt. (photo by Rich Holland) 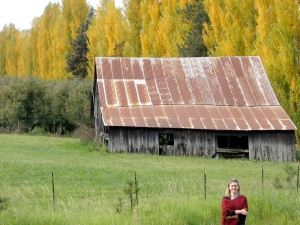 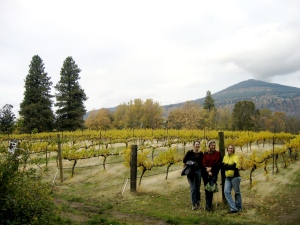 Ivy, Tara, Ted and I drove up the Columbia River Gorge to Hood River to check out the orchards and vineyards that are full of fruit in the midst of being harvested. Just stunning!

We can all rest a little easier tonight, at least until Saturday when they head back to Fenway, ’cause the Red Sox beat the Indians tonight to stay alive in the ALCS . I was dressed from head to foot in Red Sox gear… even down to my toes in the Red Sox slippers on my feet. As Kaitlyn said – when we were enjoying our post-game celebratory phone call breaking down Francona’s decisions – it must have been the slippers.

How do you top a gorgeous sunny October day in Autzen Stadium (where Oregon beat Washington State 53-7)?! By capping off the day tuning into a Red Sox playoff game on the radio in my new car on the drive back to Portland. Listening to the game on the radio reminded me of 2005 when I listened to Jerry Trupiano and Joe Castiglione call the games on hot humid summer nights from my porch in Brookline. Don’t you just love October!