Seven years ago I started research on the Lincoln Cottage, a small house situated on a hill on the edge of Washington D.C. where Abraham Lincoln spent his summers while President. He couldn’t travel to the Shenandoah Mountains like Herbert Hoover did or Camp David like many modern presidents do now. Our country was at war so he needed to stay close to Washington.

However he needed a place that was quiet, where he could think outside the chaos of Washington, and escape the hot swampy weather surrounding the White House. Even during the usually idyllic summer months Lincoln was often described as sad and restless as he wandered the grounds. During the summer of 1862 while living at the cottage he formed his thoughts on slavery that would he would eventually formalize with the Emancipation Proclamation.

In 2002, when I started this project I would not have believed that an African-American would reside in the White House when the celebration commenced. Now I can’t imagine anything else. In itself it’s the most profound element of the celebration and exactly what Lincoln foresaw as he pondered this very issue at the Lincoln Cottage.

the cottage and grounds in 2002 before restoration

As I sit here watching the snow fall in Portland (yes in Portland!) I’m transported back to Boston six years ago. I moved to that city at this very same time of year in 2003. I was excited about my new job, but honestly had not warmed to Beantown. I’d only visited the city a few times before moving and each trip possessed a lovely little constellation of disasters which left a poor taste in my mouth.

But there I was – new job, new city, and new place to live – and I thought one out of three ain’t bad. My living situation was not ideal. I’d had two days to find a home and so settled for a college-esque place in the densest part of Boston with a roommate who had perfected cranky into an art form. The city was dirty and grey – it being February and all… and I couldn’t get anywhere without studying a map and practically tatooing it onto my body before leaving the house. (Even with all that effort I still ended up turned around at least once a day.)

The icing on the cake was what is now referred to as the North American Blizzard of 2003 or President’s Day Storm II. Flakes started falling on Monday February 17th and within 24 hours a record-breaking total of 27.5 inches of snow had buried the city… and my car. I had not yet learned the keep-up-with-the-snow-as-you-go method of New England winter survival so I let my car sink deeper and deeper into a cavern of heavy wet snow.

By the early afternoon hours on the 18th I decided to venture out and clear off my car. What I thought would take an hour tops took me until dark. I had a small scraper and had found some kind of shovel, but neither were very effective. On top of this – those with cars parked next to mine (who had already shoveled their cars out) plus the street plows added a good foot of snow on top of the nearly 2 1/2 feet that mother nature had bestowed. It was a sight to behold, and I honestly think I was in a kind of snow haze that kept me from going completely insane. Some left over childlike wonder at the sight of so much snow.

Towards the end of this archaeological dig one of my neighbors exited his house and offered to help me unbury my car, which uncharacteristically I accepted. After about another hour of digging when we were nearly done he sheepishly admitted that he’d contributed to the piles of snow on my Subaru when he had unburied his car earlier. Although I could have been angry I was actually glad I’d found the first person outside my office that was genuinely nice. Honestly I’d had my doubts before that day. Fortunately he was the rule and not the exception and I grew to love being in Boston… and even sometimes miss the snow.

I kept waiting for the shoe to drop, but it never did. Four days, four girlfriends, roundtrip airfare, spa treatments, penthouse suite at the Teton Mountain Lodge, car, lift tickets and demo skis – all on the house. It seemed too good to be true, but it wasn’t. It really happened and we soaked up every last minute of it. On top of all that I got to reconnect with an old friend and his wife who made our weekend even better. We really felt embraced by Jackson Hole. Of course the best part of the whole weekend was being able to share all the magic of my good luck with Cyd, Lee & Tricia. 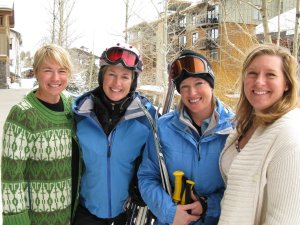 Apres Ski in the penthouse suite with views of the mountain – Lee, Darin, Genny, Tricia & Cyd

The Spa – our home away from home