what a fabulous weekend at the coast with the peets! it was just like all the good old times rolled into one weekend! we watched and (melissa and i) sang ALL the songs from grease 2, walked along the prom, ate pronto pups, played skeeball and scrabble, had a crab and spaghetti feed, and watched the ducks game (which had to be the saddest performance i’ve seen in a long time*). i have to say of all the things i’ve enjoyed being back in oregon, spending time with melissa and her family has been one of the best surprises!

*for those of you following the blog, but not college football, the oregon ducks’ dream season went south with one snap of our heisman-hopeful dennis dixon’s knee during our loss to the University of Arizona. that one injury took him out of the running for college football’s biggest individual award and took our team out of the running for a national title. it was beautiful while it lasted and i think it’ll be a long time before we forget how great it was to watch dixon and oregon’s amazing spread offense.

Can you believe this season?! I thought winning the World Series would be the cherry on my sundae, but the college football season has been a stunning adventure. What started with tickets on the 50 yard line has got better and better with each game. Our last home game was nationally televised and finished under the stars. I met up with Melissa, Jay and the rest of the Peets clan on Friday night before the game and we spent another gorgeous Saturday tailgating outside Autzen. Then Dixon and the Ducks took the Arizona State team to task – and as of this moment we’re ranked #2 in the country. Go ducks!

I’m so excited! My firm and I were awarded the Dorris Ranch project! Dorris Ranch is a public park near Eugene that is also the first commercial hazelnut farm in Oregon and they have some preservation planning issues that we’ll be helping them with over the next year. This was my first project proposal with my new firm and I’m super thrilled and relieved that it all went so well. I didn’t sleep a wink the night before the interview, but it went great and we found out the next week that they wanted to hire us. Of course the question now on everyone’s mind is why are they sometimes called filberts and other times called hazelnuts. My friend Tricia theorizes that Phil and Hazel got in an argument that has never been settled. 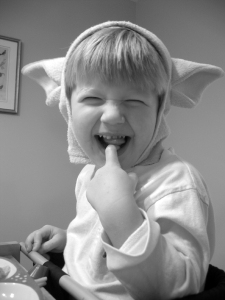 None of us could remember an Oregon halloween with better weather. The joke around here is that it’s always beautiful right up until the holiday and then that day a huge storm with torrential downpours and high winds rolls in and all the kids have to wear rain gear over their costumes. Well not this year, it was a warm night with starry skies when I went over to Lee and Guido’s house to go trick or treating with their three kids and neighbors. All the kids donned their Star Wars outfits, including Henrik dressed up as Yoda. And the best part was that even the adults got treats – thanks to one of Lee’s neighbors who handed out dixie cups with shots of baileys! Now that’s an idea I’m going to borrow someday.