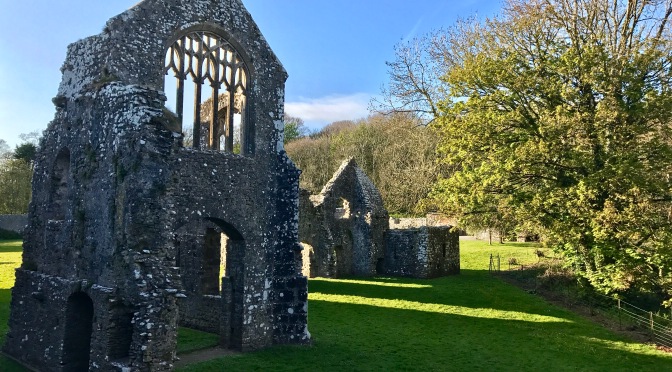 I can’t remember the last time I made a daisy chain, but it had likely been 25 years before the idea crossed my mind again. I was sitting in St. James’s Park in London on an unseasonably warm spring day when I started picking daisies (Bellis perennis) and creating a chain. The technique I’d learned as a child came flooding back as did the joy I always felt doing this in the park near my grade school.

I finished the daisy chain and instead of pressing it in my sketchbook, which I do with most flowers I pick when I’m traveling, I hung it in the branches of a nearby cherry tree. Maybe someone else would see it or maybe it would just blow away in the breeze. My mind was already looking forward since I was leaving London that afternoon and promptly forgot the few moments I spent soaking in all the beauty of that day in one of my favorite parks.

A week later I was in Wales at the Bishop’s Palace in Lamphey near Pembroke. It’s not a highly visited destination, and took me a full day of train rides with three transfers to get there. My favorite was the stop in Carmathen where they made train announcements in English and Welsh. The last train took me to a platform in Lamphey where they stop only if you request it. It’s a one-track train that goes out and back once a day, picking up and dropping people off in one direction before reversing and heading back and doing the same. You want to make sure you’re at your stop in plenty of time and well visible so the train knows to stop and pick you up.

I got off at Lamphey and settled in an inn near the church before walking a short distance to the Bishop’s Palace. It sounds grander than it is nowadays. In its heyday it was like a spa retreat for the clergy. They would come here to eat, drink and relax. Perhaps getting away from a stricter schedule and more responsibilities at their home abbeys or maybe it was a conference retreat of sorts.

After the reformation when Henry VIII dissolved all the monasteries, it was given to my ancestors, the Devereux, who used it much like a summer home. It’s likely my 14th great-grandfather Walter Devereux used it more frequently since he would pass through Wales on his way between England and Ireland in the service of Elizabeth I and likely stopped here on his way. His wife and children, including my 14th great-grandmother Lettice and my 13th great-grandmother Penelope, likely only visited in the summer.

It’s in ruins today, but with a little imagination and the aid of some well-researched and illustrated interpretation tucked in around the grounds, you can start to get a sense of the former grandeur of the place. Its charm still emanates, but the details are lost to the ages.

I walked around the grounds in complete solitude and in and out of the stone ruins, including a stone archway that framed an apple tree. I was imagining what my ancestors, Penelope and Lettice may have done here and at that point turned to look closer at the archway’s wall. Hanging there was a daisy chain, similar to the one I’d created a week before, tacked into a crevice. I was taken aback. I hadn’t made a daisy chain in decades, and not seen one in as long, but here in the span of a week I’d created one and found another.

My perception was that a veil had been lifted between time and space, that there was a message or sign embedded in that experience. I don’t know more than that, but I know I felt a deeper connection to the place and people who came before me, and less solitary than I’d felt in the hour or so before wandering around the grounds. Whatever it was, it was a lovely way to end the day, which also happened to be my birthday.