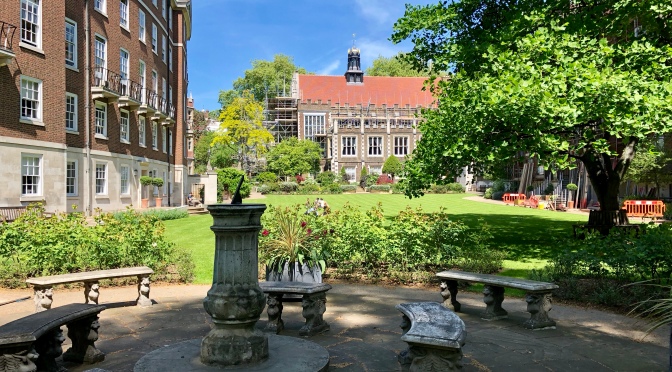 On this day in 1598, Queen Elizabeth I finally receives her cousin, Lettice Knollys Devereux Dudley Blount, at court. Lettice, the Countess of Leicester and my 14th great-grandmother, had traveled to London two months prior when signs started appearing that the Queen would see her for the first time in nearly twenty years. As early as January excitement surrounding the encounter was brimming, “the greatest newes here at Court is an expectation that my Lady Lester shall come to kisse the Queen’s hands.”

Though they were family (Lettice’s grandmother and Elizabeth’s mother were sisters), and Lettice and her mother had also served as a ladies-in-waiting, all ties were severed when Lettice secretly married the Queen’s favorite, Robert Dudley, the 1st Earl of Leicester, in 1578. He had wanted to marry Elizabeth after his first wife died, but she refused and he turned to Lettice, a recent widow who looked a great deal like Elizabeth only younger. So after two months of waiting in London at her son’s home of Essex House, which had once been her London home with Robert, she was preparing to head back north to her country home of Drayton Bassett when the summons to visit Elizabeth came on March 2.

There had been several false summons, but on March 2 Lettice had a brief audience with the Queen, most likely at Whitehall Palace. According to contemporaneous accounts the meeting was short. Lettice kissed the Queen’s hands and breast before they embraced and the Queen kissed her back. Lettice may have brought a piece of ‘faire’ jewelry as a gift worth around $70,000 in today’s currency. She had intended to give it to the Queen the night before at a dinner they were both invited to at the home of Baroness Chandos, Dorothy Bray Brydges Knollys, but Elizabeth backed out of attending. Within days the Queen was criticizing Lettice again with ‘some wonted unkind words’ and thwarted any additional efforts to be reunited. The Queen died five years later while Lettice lived for another 35 years, outliving all of her husbands and children.